Buy on Sputnik, Sell on Apollo

After writing yesterday’s post on investment returns following the Apollo 11 moon landing, I couldn’t help wondering what returns looked like after Sputnik.

So I looked it up.

It is an interesting thought, since the two are opposite sides of the same coin and are separated by more than a decade. While the moon landing was a moment of optimism and triumph in the United States (even though Germans built the rocket), the Soviet launching of Sputnik was a low point in moral for the United States and for capitalism in general.

And don’t forget, shortly after Sputnik went into orbit, the United States faced more dismay as our first attempt to launch our own satellite crashed back into the launch pad in a ball of flames.

So would you have felt more comfortable buying US stocks when Neil Armstrong set foot on the moon, or would you have wanted to buy stocks as the country is gripped with Sputnik fear?

As I wrote in my last post, investment returns for the 10 years following the Apollo 11 moon landing were poor. They were 4.73% annualized…..and after adjusting for inflation returns were negative for the decade at -2.13% per year. 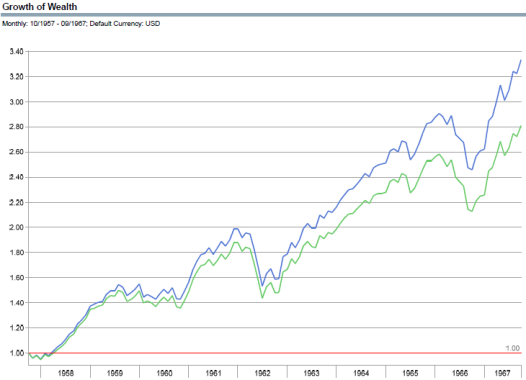 I’m not saying Sputnik was the reason stocks had great returns following October, 1957. What I am saying is that bad news doesn’t necessarily mean a bad investment environment. If anything, it is likely to mean just the opposite.

The third quarter 2017 was very good in most investment markets. This was especially true in international and emerging marke...

International Investing is Harder to Sell

It's becoming harder and harder to convince families and corporate clients that international diversification is good for the...