The Moon Landing and Investment Returns

Any other time periods like this you can think of over the last century? Take a moment to think about accomplishments that heralded great optmism about technology, about the economy, about the human condition.

Did you think of the first moon landing of Apollo 11?

Neil Armstrong set foot on the moon on July 21, 1969. Here is a chart of investment returns for 10 years, starting in July, 1969. The US total market is in blue. The inflation adjusted returns are in green. 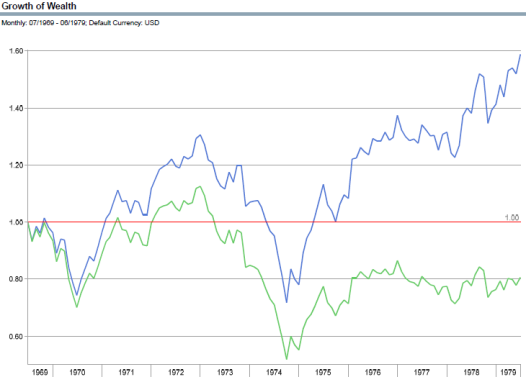 Not so good. Returns averaged 4.73%, but on an inflation adjusted basis they were negative, averaging -2.13% per year.

How were you feeling about the future when Armstrong set foot on the moon? Probably a lot different than a guy waiting in a line for soup in 1932. But when would have been the better time to invest in the stock market….

We all know our emotions can get in the way of smart investing. When I advise clients, I also help them understand how “logic” and “rational analysis” can get in the way when it’s used to forecast. It would have been easy to come up with rational reasons why the world is collapsing in 1932 or why 1969 is ushering in a new era of prosperity for mankind. But loading up on stocks in 1969 or dumping stocks in 1932 would have had disappointing results. It’s just another reminder of the snags that can eat away at a family’s investment results as the decades pass by.

The third quarter 2017 was very good in most investment markets. This was especially true in international and emerging marke...

International Investing is Harder to Sell

It's becoming harder and harder to convince families and corporate clients that international diversification is good for the...